For thousands of years, the Chinese have believed the secret to life revolves around the “pa-kua” (pronounced par-kwar), an octagonal symbol that depicts the eight points of the compass. It is believed that the trigrams (eight directions) give the pa-kua its power & energy. 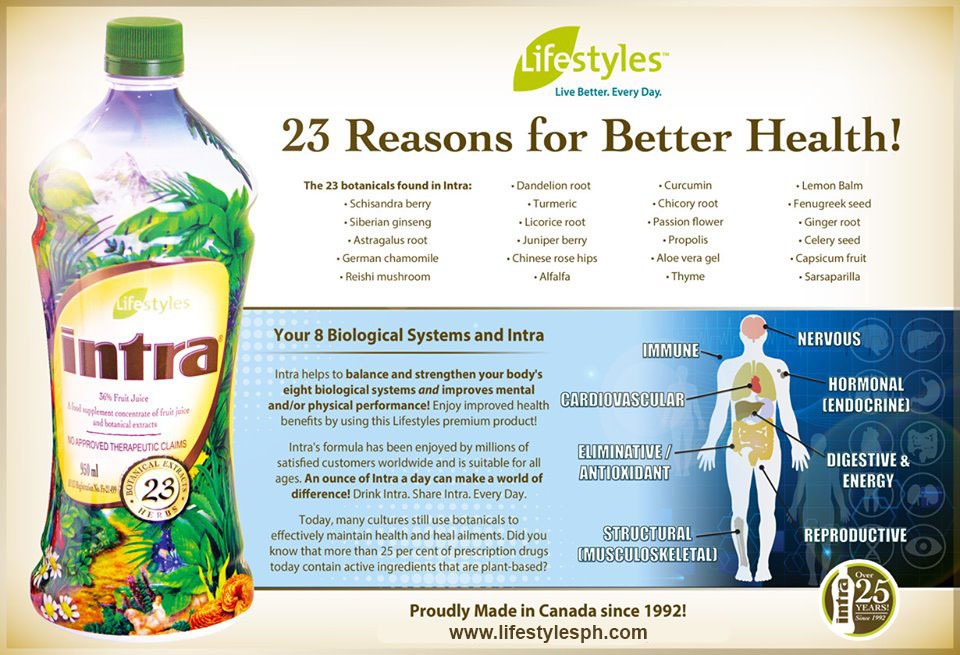 The 8 different systems in our body

Perhaps it’s no coincidence that the body also has eight biological systems:

— and that optimum power, energy, and good health depend on all systems working together in balance and harmony. 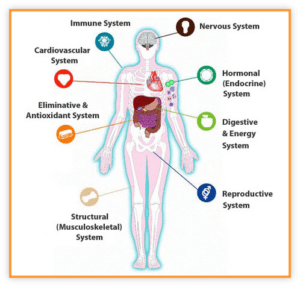 It took many years of testing a number of formulas to perfect the combination of botanicals found in Intra. These 23 naturally-sourced botanical extracts were specifically formulated to work together with each of the body’s eight biological systems.

The ingredients in Intra have the ability to modulate the functioning of glands that release chemicals, which eventually control and help balance every other system in our bodies.
Primary botanicals: Astragalus root
Secondary botanicals: Siberian ginseng root, Reishi mushroom, Fenugreek seed, Celery seed

The ingredients in Intra support the coordination of your brain, the spinal cord, and the network of nerves that thread throughout your entire body.
Primary botanicals: Siberian ginseng root, Astragalus root, Passionflower
Secondary botanicals: German chamomile, Thyme

Intra ® is a precise formulation of 23 time-tested and trusted botanical extracts manufactured by Lifestyles Global Network Canada. As a natural food supplement, Intra® helps balance and strengthen the body’s systems with the essential nutrients that are lacking in most modern diets. 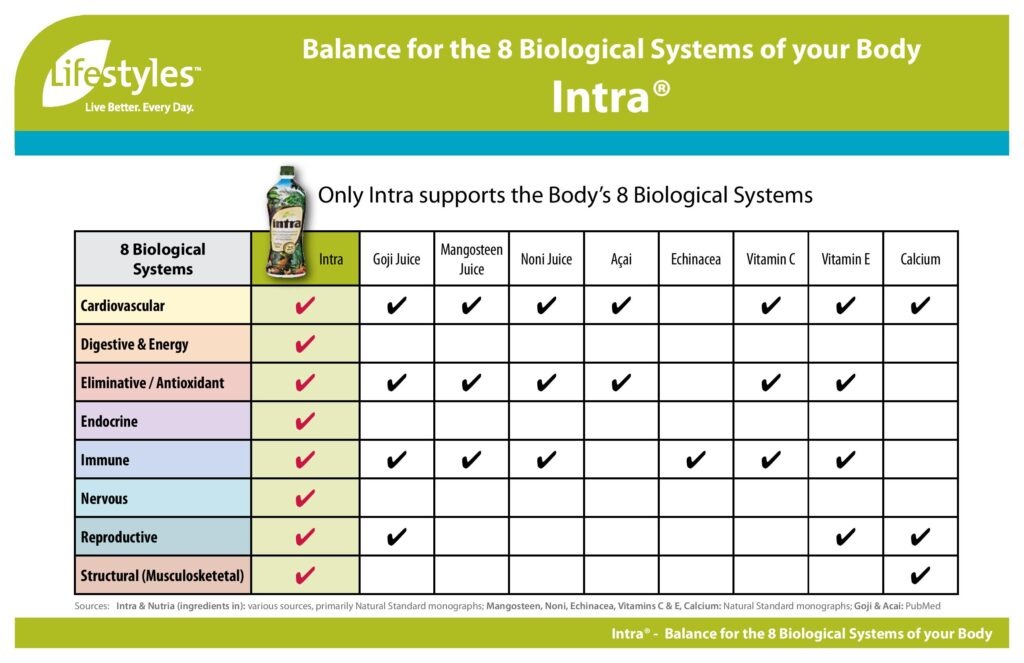 2. Eleuthero (Eleutherococcus Senticosus) One of the most thoroughly documented traditional botanicals. Recently “rediscovered” based on studies by Russian scientists.

3. Astragalus root (Astragalus Membranaceus) Considered one of the superior botanicals. Many experts consider it superior even to ginseng in various aspects.

5. Reishi mushroom (Ganoderma Lucidum) Referred to in imperial China as “the elixir of life”; its use was reserved for the Emperor.

6. Dandelion root (Taraxacum officinale) Known for its strong roots – and perceived as a symbol of strength and longevity.* Native to Europe; grown and used around the world.

7. Cascara bark (Rhamnus purshiana) Known as “sacred bark” by Spanish explorers. Native to the Pacific coast of North America; harvested by early American natives who felt it had strengthening properties.*

8. Licorice root (Glycyrrhiza glabra) Native to the Middle East and China. Licorice is called the elder statesman because it was thought to harmonize and unify other botanicals within a formulation.

9. Juniper berry (Juniperus communis) Native to Eastern Europe, some specimens of Juniper are over 1000 years old. The resinous aromatic berry-cones were highly valued by early Europeans who believed the evergreen Juniper to represent life power. Used in the preparation of the classic flavoring ingredient.

10. Chinese rose hips (Rosa species) Among the various species of roses used for their fruits, the fruits of the R. Laevigata are the most highly valued traditionally by the Chinese. Classical writings report its effects as “resistant to cold and light in the body”. High in bioflavonoids, plant acids, and other nutrients. Native to China and Japan.

14. Passionflower (Passiflora incarnata) Native to the southern U.S where it was highly valued by Cherokee Indians, who believed it to be of great importance and used it in a wide range of traditional preparations.

15. Bee pollen (Apis Pollenus) Rich in nutrients including vitamins, minerals, proteins, and amino acids; 2000-year-old Chinese legend claims that long-term use will cause one to “be light in body and full with life”.

17. Thyme (Thymus Vulgaris) Native to the Mediterranean region; now extensively cultivated worldwide. It has unique properties; and is commonly used in cosmetics and food.

18. Chinese pearl barley (Coix Lacryma-Jobi) With a use history of over 2000 years, it possesses qualities similar to oriental ginseng, but in a milder form. Found in tropical regions worldwide.

19. Fenugreek seed (Trigonella Foenum-Graecum) Mainly found in the Middle East and Mediterranean region. One of the truly ancient traditional plants with records of use dating back millennia to ancient Egypt. Said to impart “fire and vigor”.

22. Capsicum fruit (Capsicum Species) Rich in vitamins, traditionally to stimulate metabolism; commonly used to help improve the action of other botanicals in formulations.*

23. Sarsaparilla (Smilax Officinalis) Native to tropical America and the West Indies. Long famed as a folk remedy and currently used in many food products. 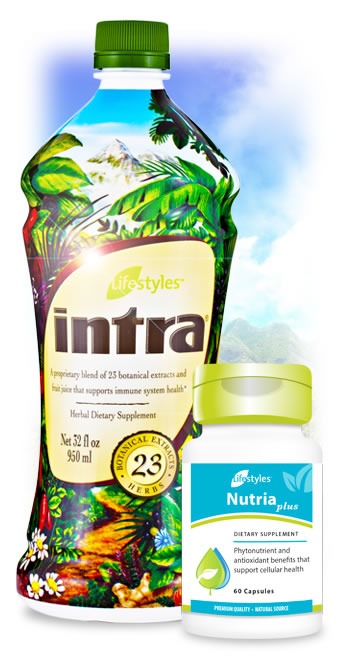 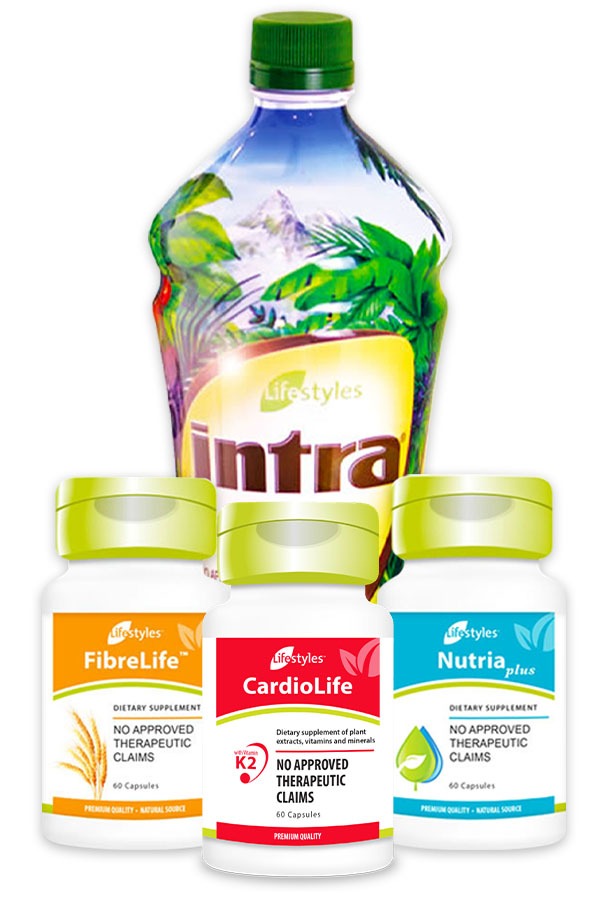 Your Path to Better Health and Financial Freedom

No thanks, I will try it next time.